GES sponsor of the 26th Managing Director of the Year Award

GES sponsor of the 26th Managing Director of the Year Award 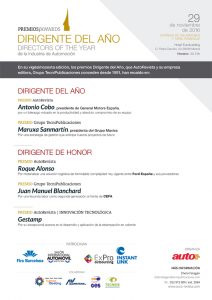 One of the sponsors of this edition is Industrias GES

In its twenty-sixth edition, the Awards Manager of the Year, which AutoRevista and its publishing company, TecniPublicaciones Group have granted since 1991, has fallen into:

AutoRevista PREMIUM
> Antonio Cobo, President of General Motors Spain
For a leadership focused on productivity and absolute commitment of your team

Tecni Group PR Publications
> Maruxa Sanmartín, president of the Maviva Group
For a management strategy that anticipates new projects for the future